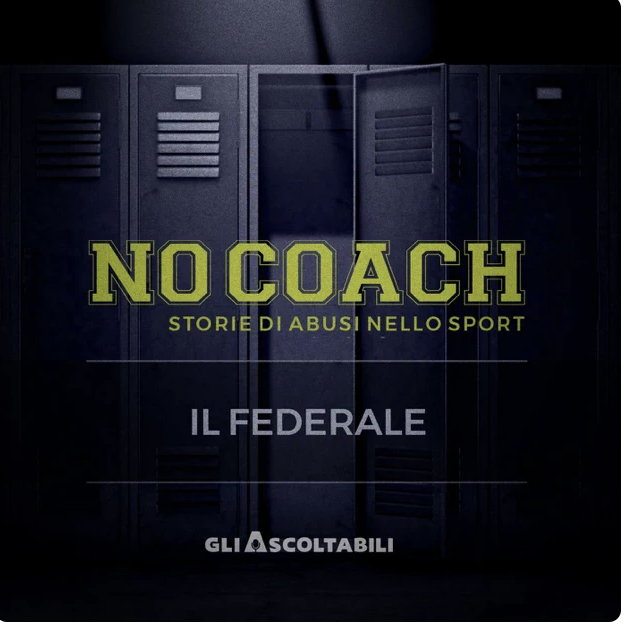 NO COACH. Stories of abuse in sport.

An investigation podcast to give voice to victims of abuse

As many know, for several years I have been in charge of the Cast Edutainment project, a content factory that explores new cognitive models. Cast Edutainment is the publisher of GliAscoltabili, a free and high quality podcast platform.

Daniela Simonetti, who is its creator, is a sports journalist who has always been involved in the fight against abuse in sport, a phenomenon that is unfortunately increasingly frequent. With her association Change the Game she turned to the editorial staff of GliAscoltabili which supported the creation of the podcast series No Coach. Six stories of abuse perpetrated against young athletes by unscrupulous coaches ready to leverage their position of influence and power.

As a radio voice talent I have always been on the sidelines of the production of our podcasts for various reasons, not least the desire to experiment with new paths and to be able to frame the project more effectively, without being at the center neither as an interpreter, than the voice of a podcast.

No Coach was therefore hosted by a brilliant sports journalist, Alessia Tarquinio, who many will know as a commentator of the Champions League for Prime Video.

No Coach. An investigative podcast that requires immersion.

Being an executive producer of the podcast allowed me to follow the stories of the abused victims from a new point of view. Until, on the occasion of the sixth episode, the story of Flaminia, a rider who was abused for many years up to the age of majority, by her coach, I was called to lead because Alessia was unable.

I’m used to interviews, it is part of every story hunter’s skill set. But when it came time to conduct the episode, there were so many doubts that assailed me as a voice talent and podcast host. What kind of delivery to adopt? What tone of voice? At first I tried to use the skills that every good voice professional must have. I worked with tone, rhythm, intention, trying to follow the modalities that Alessia Tarquinio had applied, typical of her conducting investigative stories in front of the camera. But, partly because I’m not as capable as Alessia, partly because I was completely disconnected from the story, the result was decidedly negative. I couldn’t get into the story, I was, as a podcast host, completely out of context. I therefore closed my eyes and decided to try again following the wave of emotions that listening to Flaminia’s testimony generated. After all, I conducted the interview, I looked that girl in her eyes, I had her story and the details of a nightmare that lasted many years, under my thumb. It was in this way, with great simplicity, that I managed to conduct episode 6 of No Coach, entitled “Il Federale”.

Gli Ascoltabili, podcasts, capable of involving and giving new life to the profession of the voice talent.

And here we enter an even more interesting and compelling world for those who spend most of their day in front of a microphone in the recording room: that is, the adv voiceover.

Podcasting is a profession that has little to do with the skills that an italian voice talent can boast in front of the microphone. Podcasting has very different criteria, which are based on the generation of an empathic relationship between the host and his audience, based on the sharing of points of view, sometimes of emotions, considerations that are strongly related to our values, principles. Or simply the willingness to entertain and the need to be entertained.

Let’s be clear: an italian voice talent is also a person! And there is no shortage of examples of actors and voice actors who have ventured into the creation of podcasts based on contents and themes that have nothing to do with the profession of the voice.

Let’s say that the rule is just one: put the contents at the center without frills and without complacency. Unfortunately, this is a challenge that those who use their voice professionally are not always able to win with ease. Technique becomes an obstacle much more than an opportunity, and the effect that is generated is sometimes a distance from the listeners rather than a desire to immerse themselves and listen to a story. This is one of the reasons that led me to steer clear of the podcast as such.

It is true that I have had the great opportunity to express myself in this area for many years, throughout my career as a professional italian voice talent. First in my early years as a radio host, then more recently in the radio program Destini Incrociati, which allowed me to give vent to the need to tell stories, both as an author and as an interpreter.

With GliAscoltabili, together with the team that supports the production of every day, we design and implement ideas in which entertainment is the catalyst for the transfer of contents that can sometimes be too difficult or too uncomfortable to demand even a fraction of our own. attention. The podcast is therefore a language of that “edutainment” that we try to pursue every day in Cast Edutainment.

And we get to results you do not expect …

No Coach lands abroad on the pages of The Guardian.

Precisely this shift of the center of gravity of my being a professional italian voice talent to author of contents, has allowed us to obtain results that would otherwise be impossible, such as the launch of storytelling projects of great impact and great satisfaction. Like No Coach, Stories of Abuse in Sports.

The enrichment of coming into contact with the stories of human beings, people, different sensitivities, giving them a voice, in some way, the possibility of restoring dignity to unjustly marginalized people either because their story is difficult to tell, or because it does so convenient for those who manage the economic and organizational levers of competitive sport, these are all objectives that can be achieved if we become a storyteller. If, as the English say, we put ourselves at the service of the stories (serve the story) rather than at the center of it.

It is a non-trivial effort that nevertheless is capable of giving enormous satisfaction. Like the one that happened to us in March 2022, when the podcast No Coach was cited as a virtuous example of an investigation, by none other than the famous British newspaper The Guardian.

In this link you can read the full story, obviously on the subject of abuse in sports.

The stories of Khalida Popal, and of the Italian boys and girls we have told about in the series, which you can hear here in full, therefore take on a different perspective, in which we go beyond the borders of our country, influence areas of important decisions such as those of transnational bodies. In short: they make you feel professionally connected to a pulsating world in which you can make a difference with your work.

Being an Italian voice talent gives you wonderful sensations. Putting yourself at the service of whoever calls you to enjoy your unique ability to interpret emotions in front of the microphone is a great satisfaction.

Contributing to a project that can make a difference in society like No Coach – Stories of abuse in sport is far, far more exciting.