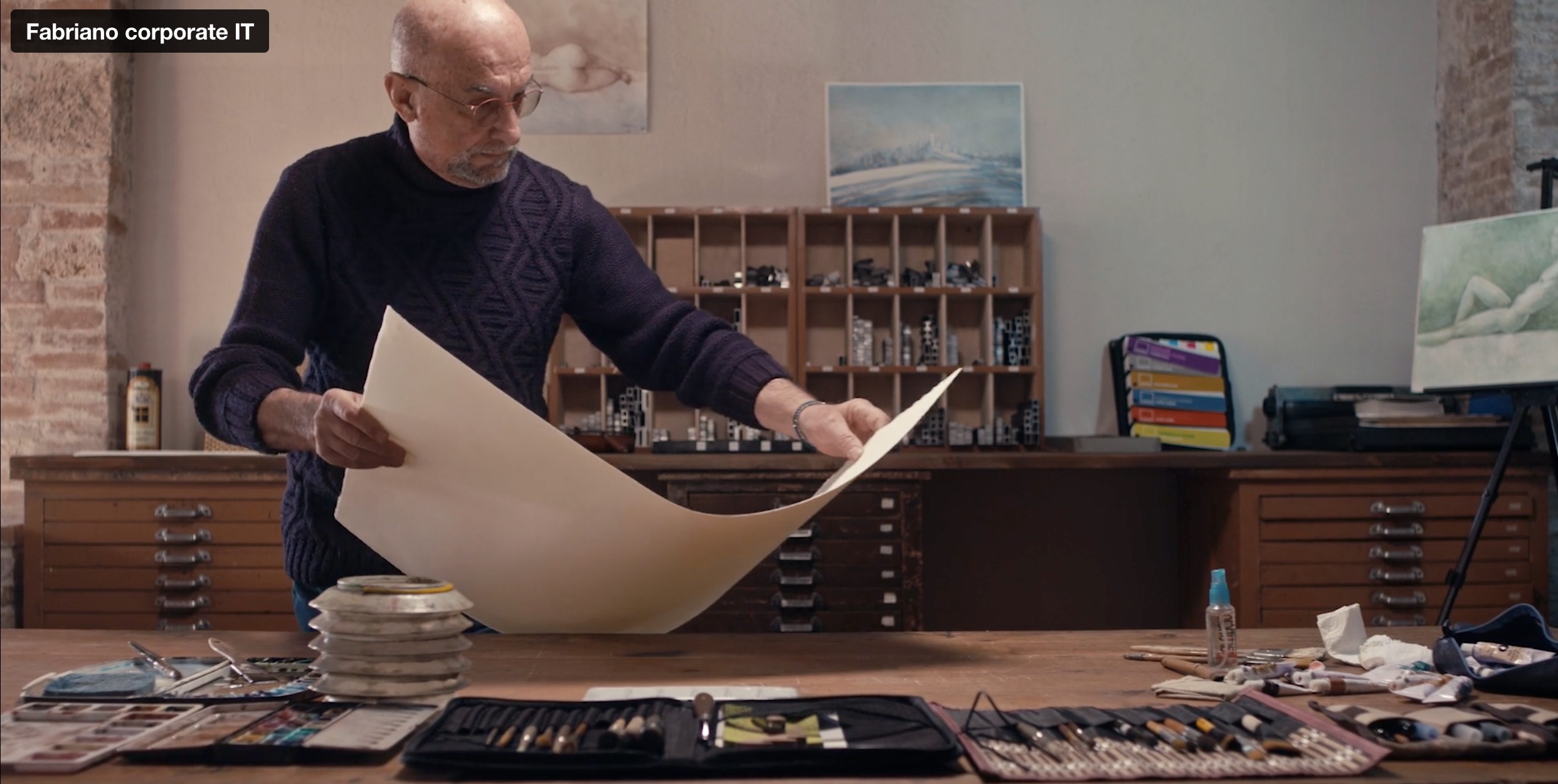 Fabriano. A corporate video made as… paper

The Italian voiceover of a corporate video put to the test

When I was asked by the friends of Rare-Partners for the voiceover of the Italian version of the corporate video of Fabriano, I immediately thought: here’s another corporate video, a bit self-referential, showing only production methods and virtues of a company. Well, I was definitely wrong! The film had been produced in a workmanlike way, the script was written with a huge intro several scenes that reproduce the everyday life of different generations dealing with different type of paper. Belonging to the boomer gen, It immediately remind me of my childhood, the hour dedicated to drawing, at school, when the school satchel was deforming to contain the ruler and the album of drawing sheets, strictly Fabrianos’! That album with its white cover with blue graphics, which contained everything: from technical drawing (oh my goodness how I hated orthogonal projections!) to freehand drawing, up to the primitive tables with letters or colored boxes that made us all feel like budding Piet Mondriaan (remember too, confess it!).

Those images of the incipit of the corporate video of Fabriano made with care, were something new in the panorama of so-called industrial videos. It expressed the awareness of an identity, that oned of Fabriano, which is part of the experience of millions of Italians and probably of millions in different countries of the world.
At that moment I felt really proud I was chosen for this realization, to which I decided to reserve the maximum attention from my home recording studio in Milan.

Paper for writing and drawing: an intact charm in the digital age

Indeed, that somewhat rigid school education, which made me start each year of elementary school with the task of making countless tables of lowercase and capital letters, in block letters and cursive, has built a piece of what I am today. And that passion for ink that soils the fingertips, for the ink “sucked” by the plunger in the technical drawings, of the fountain pen that first writes on lined sheets and then, in adulthood ready to face the unknown of the completely white sheet, imagining lines and suffering the charm of writing floating in the air. A habit that I have kept until today, since I go around practically with a stationery shop in my bag, made of 0.9 pencils, bread erasers, fountain pens with different colors, from black to blue-black to sepia. Yes, as a voice talent of italian corporate videos I am quite particular, given this obsession that has accompanied me for several decades, that means to me as the blanket means for Linus: a place to be, dedicated to myself, a place where everything can start from scratch: just turn the white page and you are immediately ready to write a new story,  create a new image, build a new diagram (today the most savvy would say “infographic”).

Mark the script even in the recording room: like writing music

Using a pen on the paper is a habit I preserved also in my professional experience, when voicing in the recording studio: as an italian voice artist and voice of advertising I have been used to mark (they say so) the text with a series of particular signs that define the delivery and rhythm to be adopted in the recording. One comma, a small pause. Two consecutive commas, and the pause increases slightly in duration. An oblique bar (the usual friend would say “slash”) to signify an important break, two bars, even bigger, etcetera etcetera.
As well as the intonations to mark. A mark upwards and the sentence opens in the intention. A mark towards the base of the line (bottom) and the tone is ready to close the meaning of the sentence. In short, the pencil on the script of a corporate video, for a professional italian voiceover, is an indispensable tool, which is still difficult to do without, considering that technological innovation and also some sense of ecological ethics, require us to use technological devices instead of the printed sheet of paper. Today you may see many voiceovers at the microphone with a tablet in which the text is reported and, if you are a technological nerd, you equip yourself with an electronic pencil to “mark” the text directly on the digital screen. A sign of how times have changed that, for three minutes, were brought back in the corporate video of Fabriano made at the end of 2022.

Fabriano: A story about our past.

Yes, because Fabriano is one of the oldest stories of our country, which has its roots in the dawn of the use of paper in the world. The video, after the opening that I have described, in which the scenes of daily life of the present are represented where paper, a notebook, a sketchbook, a letter, or a student notebook, are protagonists of our daily life, which are imprinted in our mind since the early days and that take care of us when we are alone to take stock of this breathless race that is life.

In this, Fabriano’s corporate video was a very pleasant surprise, with paintings that were never cloying and played with a skilled direction, which are counterbalanced by the images of the factory, this time pertinent and not self-referential, because the dialogue rests on the necessary attention that is made in the realization of that paper that we caress, we place in the bag,  we fold in a letter (for those who, lucky, still writes about it).

I discover that Fabriano has a crazy history, dating back to 1264 (!). It practically accompanied the birth of the Italian language, probably written for the first time on Fabriano paper… perhaps!

And I also discover that many of the precious papers that Fabriano makes, are made following the ancient methods of those ancestors who had started with hand cards, spread on the boards, left to dry.

I would like to conclude with the right thanks to those who chose me to voiceover in italian language this corporate video, Rachele, Massi and Saschia, a really smart group of videomakers, strategists and producers with whom I positively worked with from my home studio, sending them the recording in different versions, which they then chose in postproduction. And if I told you that I’ve never met them, you wouldn’t be surprised, since much of the work of the corporate advertising and video voiceover artist is done remotely, sometimes connected in real time, most often picking up directions and executing them into the microphone.